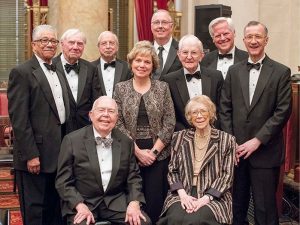 New York, NY – Susan E. Farley of Niskayuna, New York, was honored by the United States Court of Appeals for the Second Circuit on September 25, 2018, receiving the 2018 American Inns of the Court Professionalism Award the for the Second Circuit. Chief Judge Katzmann, along with Judges Richard Wesley and Denny Chin, presented the award at the Thurgood Marshall US Courthouse in New York, before about 100 attendees, including Geoffrey Berman, the U.S. Attorney for the Southern District of NY. Judge David E. Peebles represented the US District Courts from the Northern District of New York, where Ms. Farley has her office.

The United States Court of Appeals for the Second Circuit is the appeals court for all Federal District Courts within the States of New York, Connecticut and Vermont. It is one of twelve Federal Appeals Courts in the U.S. and reports only to the Supreme Court of the United States. This award is given to one Lawyer annually within the 2nd Circuit whose life and practice display sterling character and unquestioned integrity, coupled with ongoing dedication to the highest standards of the legal profession, the rule of law and an extraordinary dedication to mentorship.

Nick Mesiti, Managing Partner of HRFM said, “Susan is one of the most talented and dedicated attorneys I have had the pleasure to call a colleague. Her dedication to not just her clients, but the legal profession as a whole, is truly unmatched and this award is a clear indication that her colleagues throughout the district know that to be true. It is an honor for our firm to have Susan recognized by this distinguished Court.”

Susan Farley said, “I am humbled and honored because I know so many more deserving than I. My heart is filled with gratitude. Our profession is vital – whether someone’s life or life’s work is at stake, each deserves what our constitution requires. We shine as zealous advocates advancing the principle of fairness and reason. To do this we must first, elevate the judicial system above all, including the client; and second, teach other to so the same.”

Her colleagues have rated Farley as AV Preeminent in the Martindale Hubbell Peer Review in both the Corporate and Judicial Edition. She was also named one of the top 25 Women Lawyers in Upstate New York by Super Lawyers across any discipline, as well as the only IP attorney elected to the list. Susan’s insight and work has been featured in scores of publications, including the Wall Street Journal, New York Times, San Francisco Examiner, Los Angeles Times and she is a frequently sought-after speaker on design law topics by countless academic institutions, trade associations, bar associations and USPTO events.

HRFM’s attorneys and patent agents are some of the most respected professionals in their fields, with expertise in numerous technical disciplines, ranging from physics and pharmaceuticals to computer science and chemistry and many technical areas in between. The litigation team successfully protects our clients’ interests in courts throughout the United States and our clients are leaders and innovators in their industries, ranging from individuals and start-ups to Fortune 100 companies.